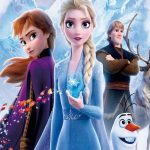 Given how much coin 2013's Frozen banked during its theatrical run (a neat $1.2 billion, if you don't mind), the swag of awards it accumulated (an Oscar for Best Animated Feature for one), and the chart-topping ear-worm that was "Let It Go" that it produced, a sequel seemed inevitable.  In fact, Disney would have to be close to insanity to not even consider a second go-around, … END_OF_DOCUMENT_TOKEN_TO_BE_REPLACED