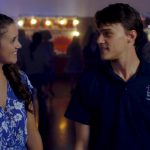 Love is in the air in the coastal town of Seafront Sands. The mysterious appearance of a young woman (played by Allira Jaques) washed up ‘starkers’ on Mim Beach turns the sleepy town into a tailspin. Named Mim, after the beach where she’s found, the young woman has a profound effect on an ensemble of entertaining local characters : a hard as nails local councilwoman (played … END_OF_DOCUMENT_TOKEN_TO_BE_REPLACED