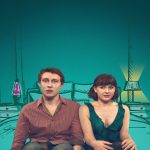 We all know the standard dreading that comes with the format of a first date - you worry you might say the wrong thing or wear the wrong outfit - but what happens when the first date is such a success that all the pressure falls on the inevitable sophomore get-together? This is the dilemma for young Brits Laura (Alexandra Roach) and Ryan (George MacKay), whose meet-cute at a … END_OF_DOCUMENT_TOKEN_TO_BE_REPLACED

From the director of Belle and A United Kingdom - Amma Asante - comes another racially-charged story of forbidden love. Where Hands Touch centres on the character of Leyna (played by Amandla Stenberg), a bi-racial girl who lives with her mother Kerstin (Australia’s Abbie Cornish) and younger brother in the German countryside. After an encounter with Hitler’s secret … END_OF_DOCUMENT_TOKEN_TO_BE_REPLACED