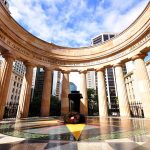 ANZAC Day is held on the 25 April every year. Here are some of the ways you can be involved: ANZAC Biscuits It’s traditional to make ANZAC biscuits. These were hard biscuits that were eaten by soldiers instead of bread. They were baked used rolled oats, golden syrup or treacle and sent to the soldiers. The biscuits were often made by the mothers, wives and girlfriends of … END_OF_DOCUMENT_TOKEN_TO_BE_REPLACED