You are here: Home / Entertainment / No Time To Cry by James Oswald -Book Review 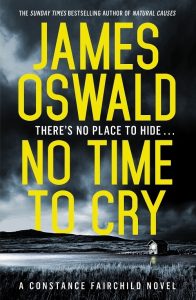 No Time to Cry by James Oswald is the first novel in his new series featuring undercover cop DC Constance Fairchild.

When Con receives a mysterious text from her partner, DI Pete Copperthwaite, she cautiously returns to the backstreet office in London that is the base for their undercover operations. She is distraught to find Pete’s bloodied body. He has been tortured and, then, executed by shot to the head.

Returning to the station the next day, she is accused of corrupting the operation by her boss, DS Bailey. Her warrant card is removed and she is suspended from operations.

Treated with contempt by her colleagues, alone and grief-stricken, she returns home to find two bullet holes in her bed, along with a stray cat.

Someone wants her dead!

It’s time to begin fighting back, despite the odds against her.

Will she survive to discover the truth behind Pete’s demise?

If you enjoy crime fiction, you’ll love the feisty new character that Oswald has created. Take time out to read this fast moving page-turner. You won’t be disappointed.

James, please bring on the next instalment!

No Time To Cry is available as a Trade Paperback and e-book.

James Oswald is the author of the Sunday Times bestselling Inspector McLean series of detective mysteries. The first two of these, Natural Causes and The Book of Souls were both short-listed for the prestigious CWA Debut Dagger Award. As J D Oswald, James has also written a classic fantasy series, The Ballad of Sir Benfro. Inspired by the language and folklore of Wales, it follows the adventures of a young dragon. James has pursued a varied career – from Wine Merchant to International Carriage Driving Course Builder via Call Centre Operative and professional Sheep Poo Sampler (true). He moved out of the caravan when Storm Gertrude blew the Dutch barn down on top of it, and now lives in a proper house with three dogs, two cats and a long-suffering partner. He farms Highland cows and Romney sheep by day, writes disturbing fiction by night.