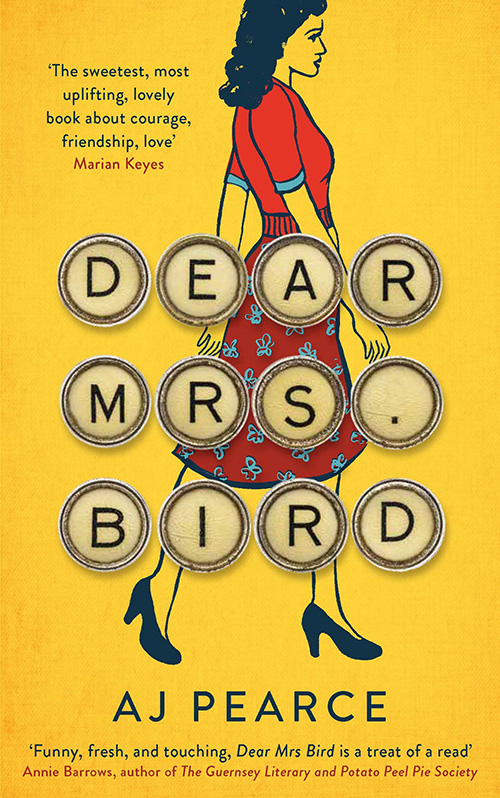 Dear Mrs Bird by A J Pearce is her first novel, which was inspired by a 1939 copy of a British women’s magazine. Its Problem Page helped women, who, in wartime, were coping alone with the loss of loved ones and the absence of their menfolk, who were fighting overseas.

In London, 1941, Emmeline Lake and her best friend Bunty are sharing a flat and trying to deal with food rationing and constant bombing by the Luftwaffe.

Believing that it will lead to her dream job as a Lady War Correspondent, Emmy joins the Woman’s Friend magazine as a typist. Unfortunately, she is to work for the magazine’s Agony Aunt, the formidable Mrs Henrietta Bird. From the start, Mrs Bird makes it clear to Emmy that she will not answer letters containing any “Unpleasantness” and those that do must be relegated to the bin!

When Emmy finds herself having to destroy most of the incoming mail or, alternatively, to type Mrs Bird’s brusk, unempathetic replies, she takes matters into her own hands. Bravely (or foolishly), and against Bunty’s advice, she decides to reply without her workmates’ knowledge. Will her secret be discovered?

This is a delightfully humorous and extremely heartwarming book that will move you to tears. The characters are charming and fearfully polite but capable of immense bravery, love and friendship. Set against the grim background of nightly bombing raids, death and destruction, it brings to life that era in British history when ordinary people pulled together and did their bit to win the war.

Dear Mrs Bird is currently is your favourite bookshop as a paperback.

About A J Pearce

A J PEARCE grew up in Hampshire and studied at the University of Sussex. A chance discovery of a 1939 women’s magazine became the inspiration for her ever-growing collection and her first novel Dear Mrs Bird. She now lives and writes in the south of England.