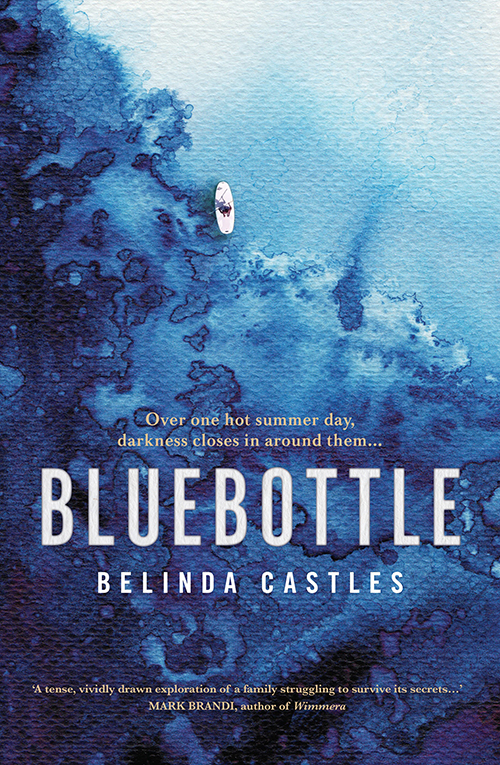 Bluebottle by Belinda Castles is the third novel by the award winning writer. It tells the story of a suburban Sydney family still struggling to come to terms with their past.

At Christmas in 1994 Charlie Bright and his family are living in a shambolic cliff-top house above the Pacific on Sydney’s glorious northern beaches. Charlie has extravagant plans for re-building the house, which never seem to come to fruition. His long suffering family are dragged along in the wake of his volatility. His wife, Tricia, keeps a low profile and immerses herself in household duties.

Louisa, the eldest child, who is almost 16, although eager for independence, still enjoys her father’s attention and admiration. The middle child, Jack, feels isolated from family and friends by anxiety that brings on incapacitating panic attacks. Phoebe, the youngest, longs for attention, particularly from her father. Unseen, she keeps watch on her family, while creating her own adventures.

Over Christmas Charlie’s moods become even more unpredictable. He constantly maligns his family, and openly flirts with his friend’s fiancée. He has also become obsessed with Monica Kazmi, a young girl, who disappeared from their former neighbourhood, and whose missing schoolbag has recently been discovered.

The story weaves back and forth between Christmas 1994 and the present, twenty years later, when Tricia and her adult children are given the chance to return to the house on the cliff.

Louisa is keen to seize the opportunity as is Phoebe, both hoping to resolve events from the past and re-examine memories of their father.

Tricia and Jack would prefer to forget those turbulent times and the distress that became unbearable.

Will the family be able to find peace and put the past behind them?

Set against the magnificence of Sydney’s northern beaches is a family in crisis. Castles’ writing revels in the beauty of the landscape and the power of the ocean but also draws an incisive picture of each of the characters involved.

Using interaction with each other and their surroundings, she gradually builds the tension to an almost intolerable level that keeps the reader in suspense to the very end.
This is a very readable and well-written novel that tells of the pain and confusion that result from perceived truths and untruths.

Bluebottle is available from your favourite bookstore in paperback.

Belinda Castles won the Australian/Vogel’s literary award for The River Baptists in 2006 and was one of the Sydney Morning Herald’s Best Young Novelists for 2008. Her next novel, Hannah & Emil, won the Asher Literary Award for 2012-13. She has recently returned from teaching in the UK and is currently a lecturer in creative writing at the University of Sydney. Belinda lives with her husband and daughters on the Northern Beaches of Sydney.