You are here: Home / Play / American Strut: Oz Comic-Con is for the Comically Damned

My knowledge about comics and anime is nothing. So when my editor asked me if I was interested in writing about an experience at Oz Comic-Con, I said, “Hell yes.”

I arrived around half past eleven sporting a slight hangover from the night before. My first call to action was to find a food vendor and get myself a coffee to wash down a couple of Advil. I saw a sign for a cafe across the large expanse of the Brisbane Exhibition Centre that was Oz Comic-Con. I made my way in that direction and suddenly I was in the midst of it.

The colors were vibrant and the people were weird; the women were beautiful and dreamy and incandescent like something out of a fairy-tale. There were stalls either side of the walking lanes, with each one something equally as interesting to offer. I got spun around and bumped into to someone, I turned to apologize – “Holy shit! I just bumped into Chewbacca!” This was a gnarly call for someone with a hangover. I was sticking out a bit, wearing a black denim button up, black pants and my brown leather Chelsea boots, but no one seemed to take notice nor care. I got my coffee and got to work. 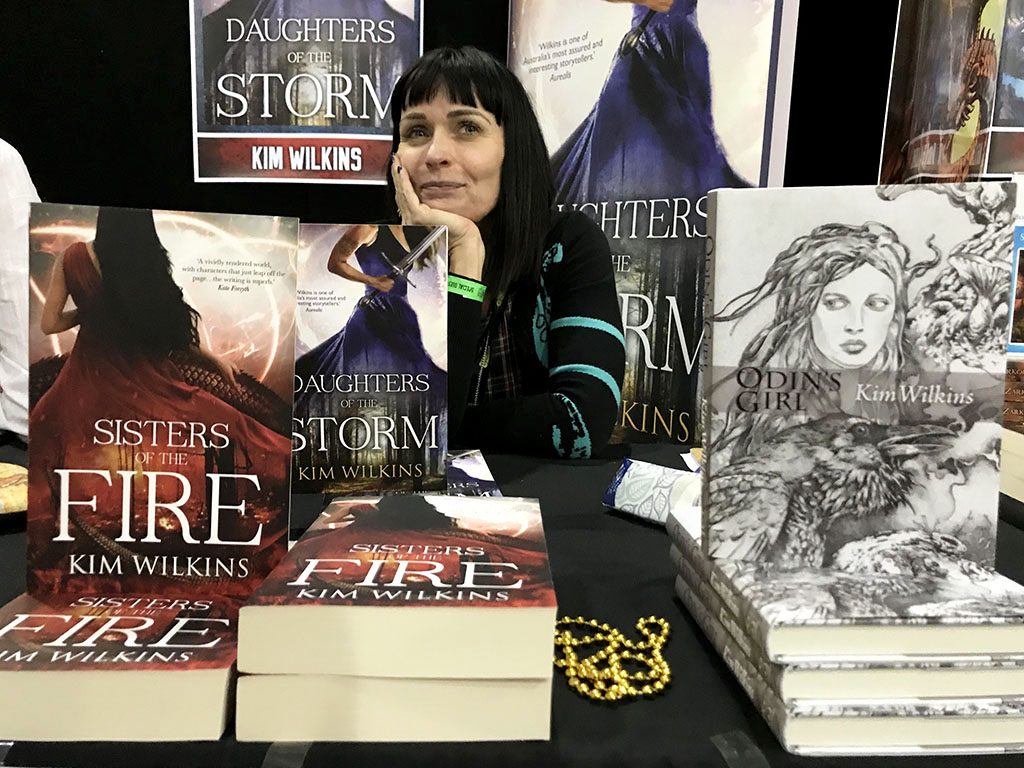 I saw the beautiful Kim Wilkins, famed fantasy author, sitting down and I went to speak to her. She was charming and elegant; she made me sweat a bit, and immediately I did my best to act debonair. I asked her what a blow-in like me could learn about an event like this. She told me, “What I find most particularly interesting is that people of all body types, all genders and in-between genders, and all races can come here to dress up and there’s no judgment whatsoever. There’s no judgment anywhere, at all. It’s like the safest space there is for people who are all a little be weird, and as it turns out, we’re all a little bit weird.” 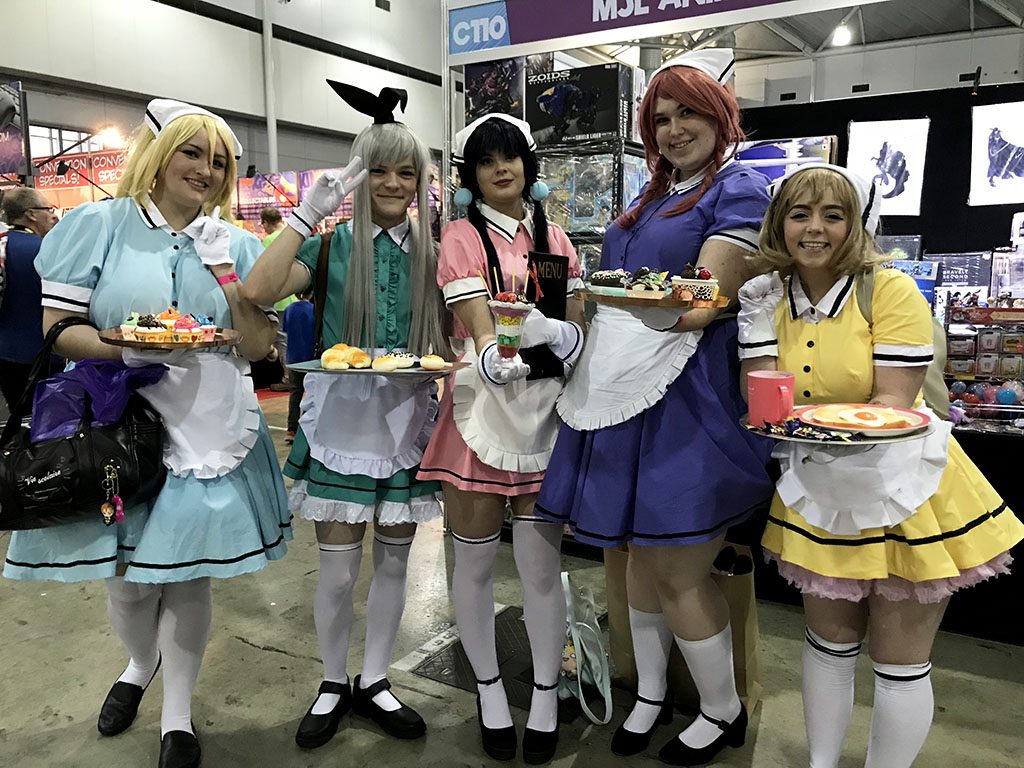 I thought that was a nice sentiment, and apart from a slight headache, I was very happy to be there. I did my rounds and spoke to different people. I found a group of four ladies and a young man dressed in coordinated outfits from the same fantasy, like a set of matching dinnerware from another planet.

I explained who I was and asked, “I’m new to this sort of thing. What compels you guys to dress up and attend an event like this?”

They were full of smiles.

“The people and the community,” one said, “None of us have met before today, but we found each other on Facebook and came here together because we all love the show. And we all love dressing up.”

I remember thinking it was pretty cool that you can find your specific kind of strange anywhere on the internet – whatever it is. And we all do it.

“So what aspect of dressing up is most appealing? I’m still trying to understand that.”

Then they gave me my favorite answer. “You could explore different sides of yourself. You see, when people find characters they like – they can see themselves in it – and being in the costumes gives us a chance to explore that.“ That resonated with me. I think we’re all influenced by something or someone that plays a part in the way we act and speak.

I was beginning to understand the appeal, and my hangover was nearly gone. I was hungry for more, but as I kept going around to interview the cosplayers, I grew bored of staying on the surface, meeting people for just a few minutes then moving on. I wanted to befriend someone and get deeper into it. Someone I could stick around with for a while. When I went outside for a smoke I saw a tall dude in civilian clothes that looked like he was on my level. Though he wasn’t dressed in cosplay he was there because he was a fan. I went up to him.

His name was Ray, he’s 30 and he owns a tattoo parlour in Melbourne. He was in Brisbane to catch up with some friends and attend the event. He’s been a fan of comics and anime since he was young, and he’s no stranger to these sorts of events.

We made our intros and I told him why I was there. With a couple drags left in our smokes he said, “You been to the Pig ’N’ Whistle?”

He took last drag, put out his smoke, “-alright, c’mon then.”

Pig ’N’ Whistle is a beer bar just up the street from the Exhibition Centre. If you yell loud enough they can hear your order from inside Oz Comic-Con.

We got to the bar, it was hardly half past one now, and all I had in my system was coffee and pills to aid my recently diminished headache. But I can’t say no to a beer – “Two pints of One-Fifty Lashes please!”

Ray was a good dude to talk to. He was solitary yet cultured – well informed by his own damning experiences. He spoke carefully and philosophically, especially with the more beers he drank. He’d look around and make some comment like, “Meaning is hard to find. Ya know man? Real meaning. We live in a very capitalist, commercialist society.”

I knew he was going somewhere interesting with this, “Yeah man I see that.”

He had a swig and continued on, “You know that question you had before – why do people dress up for this? Well, I think dressing up is a connection to the part of themselves that is not tangible – parts of the psyche or collective unconscious or whatever – and I think that’s why people dress up. To express the arcane, the opposite of the mundane.”

“Like the absurd, or the things that don’t otherwise have the channels or platforms to be expressed.”

I liked his take and I agreed with it. Personally, I’ve found those platforms exist in fetishistic sex stuff, but that’s another story.

I wanted to poke the bear a bit more and see if I could get any honey, “So you don’t think it’s just a disguise. Stepping into fantasy to escape reality?”

“Can’t it be both? Escaping can also be stepping into. People perform and wear masks on a day-to-day. So which one is performance and which one is escaping? You go to work at nine, you’re wearing a fucking suit, you’re behaving a certain way. Then you go home and you shed your costume. So what’s more authentic, what’s more absurd? Which is the costume and which is the performance?”

I liked having that conversation with Ray. I like anything that makes you question something. He opened me up to a new perspective on the event, questioning my motives behind any sort of judgment I may have had coming in.

Comic-Con is for the cool and captivating, the freaks and geeks, the weird and the wicked, the arcane and the comically damned. A haven to wear your heart on your sleeve of armor and lace, and do your very best to be just who you are, in a society where everybody wants you to be just like them. They’re some of the realest people I’ve met; ironically, celebrating fantasy.