You are here: Home / Entertainment / 3 Hours To Depthless

I looked down at the ‘#’ key and pressed it.

Voila! It came to an open.

I rolled underneath the gate and ran down the ramp to my car. As I reached the driver-side door I heard them stampeding the bank like two mountain lions avalanching the acme. I turned the ignition and my radio blared Outlaw Blues. I threw it into first, my tires wailed and the engine hummed. One of them hit my passenger-side window strongly with his fist, but long down Thomas street I soon was. He left a crack in the glass with his ring – a keepsake; a small price to pay for mayhem.

I was a block away from Dornoch Terrace, atop the hill of West End, when I got a call from my ex. I reached for my phone on the dash – that’s when I saw a strange, dark-lit figure standing on the corner of my block. He was silhouetted by the hanging sun, leaning hard against a brick wall with one foot plumb to it’s surface, and a big, flat-brimmed cowboy hat that balanced on his head like a mattress on top of a bottle of wine. We passed each other in half-time and around the corner I drove. Emotions were running hot that evening – of heartbreak, confusion, anger and loss.

I ignored the call.

I arrived at my building relieved. I had plans to meet my buddy Thom, who we just called “Handsome”, at 5 p.m. in Fortitude Valley for a drink and some food. I splashed cold water on my face and slicked back my hair. I snatched my tie, did it up, and paraded out the door to my car.

I put on Carmelita, the cover version by Jesse Jo Stark, and listened to that on repeat for the duration of my drive to the Valley. The moment I entered the skyline and was amongst the high rises and gutter people, I felt far from home but at home all the same; for the runoff is a destination that strums a familiar tune.

I arrived at Blutes and saw Handsome at the bar, sweet-talking a sweetheart, slicing the air with his sharp tongue.

“Spruce. I did some cardio today.”

Then I tipped my hat to her, he said he’d call her, and we walked off to a table in the corner.

“What’s the time Handsome?” He checked the heirloom around his wrist and said, “It’s 10 past 5…Cardio?”

We had just finished dinner when my phone buzzed on the table’s edge. It nearly fell off. Another message from my ex. I looked up from the screen and I saw the silhouette – the dark-lit figure standing at the end of the bar.

“Handsome, who is that?”

A crowd of ladies walked in and gathered in front of Handsome’s vantage.

I shrugged it off and changed the subject, “Well man, I’ve got an extra ticket to this gig tonight, wanna come?”

“What is it again?” He replied.

“It’s interpretive dance to guitars…that’s about all I know.”

We finished our food and aimed for the door. The Valley’s a place I wasn’t accustomed to. I hardly went north of the river; I mean I hardly left West End unless it was for open air and rolling pastures.

We arrived at the Judy with about 30 minutes in our pocket. The day felt like a stirring dream, like I was accompanied by the ghost of dying love – toxic, addictive, dying love.

I felt some type of way – dreary, yet unabandoned by my vast destruction. I recalled the dark-lit figure on the corner of my block. At the end of the bar. Who the hell was he?

He gave up tobacco a year ago.

I went outside and sat on the steps in front of the venue. When I struck the flint wheel, the flame illuminated my periphery, and once again I saw the dark-lit figure.

I gazed at him like sheep to the stage.

I stood up and walked to him.

“Hey…do I know you?” I said cautiously.

He was the Mustang. I was the crossing sign of mother and child.

He pulled out a pack of Lucky Strikes. A soft pack from America – absent of the crucial label warnings Australia has on shelf. He didn’t make eye contact with me at first.

He flicked his thumb against the crease of his middle finger and struck the bottom of his pack, 3/4 out came a single unfiltered cigarette that he proceeded to tie between his lips, then he focused his attention towards me as if he was requesting fire. I swiped the switch, the light unveiled his blue eyes piercing; and again there was darkness.

It remained silent for a moment, then he let out a word and his voice sang. Something like Cash, deep n’ learned.

We both took a deep drag, like the sort of long breath you’d take if you were meditating…or revisiting a bad decision.

He looked off to the skyscrapers,

Then he looked off to the 17-dollar-a-ride ferris wheel upon Southbank’s edge,

“An hour of pay for 7 minutes on rotation.”

I waited for him to continue, but he didn’t.

I said, “Attractions. I don’t mind them much anymore. To me they’re kind of like driving long range on the highway, you zone out and tune in, hear the music and reflect. I reckon that’s why people hate traffic. It brings you back again.”

He smiled through a squint in his eyes, his lips tied around his smoke again.

“You’re wise kid, wiser than me…now. What’re you running away from?”

A woman approached and asked me for a light, I proceeded to introduce her to Jack when she asked,

“Who’re you talking to?”

I glanced back to Jack and there was no one there. Instead of feeling rattled by insanity, I realized that he was nothing more than an echo of a younger me – a reflection in the mirror…in the vanity of my old house. I thought back to earlier that evening. Sour thoughts and humility, that’s what I was running from. Causing a ruckus like I used to.

I went back in and caught Handsome in the lobby.

“There you are, hell man it’s about to start.”

The lights dimmed as we entered the venue. 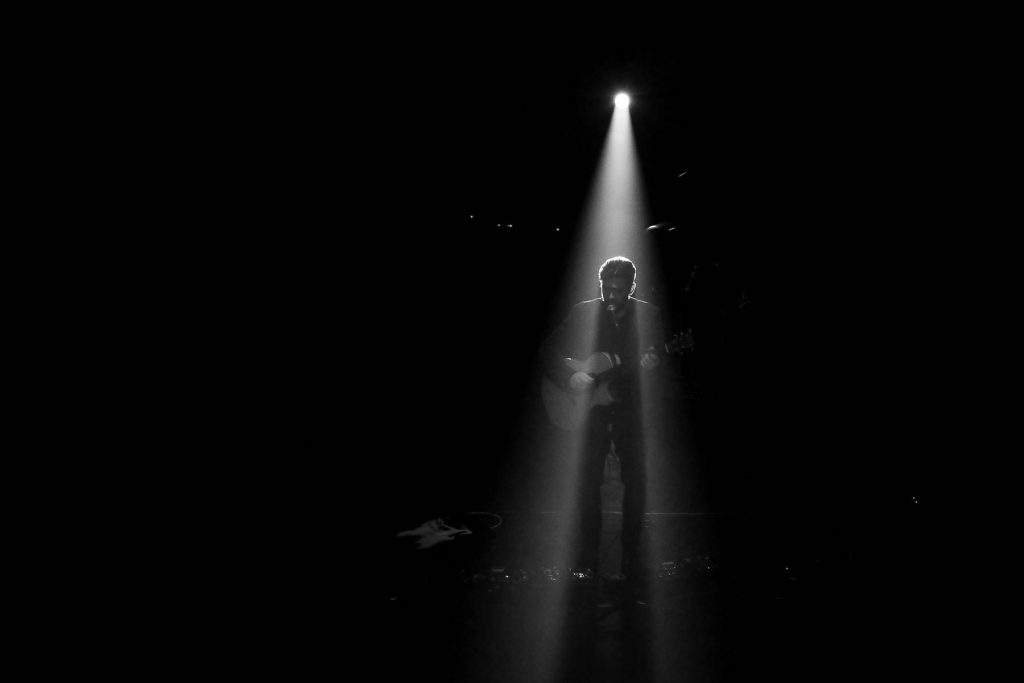 A spotlight circled the far right of the stage. There stood a man with his acoustic guitar. He began strumming farmer chords, as if he captured them in the deep south and set them free in Brisbane that night. Then he started singing a sad tune about lonesome roads and no direction. A second light circled the left of the stage. There laid a woman, collapsed to the floor, with her body softly shaking against the vibration of his rhythm. She arose as if she was controlled by string – airy, like a dove. Then he hit his fuzz pedal and the noise tsunami’d and she jolted suddenly, as if now pulled by rope violently.

I glanced to see Handsome’s reaction – he was taken. I was taken too. It seemed we were all riding parallels that late Thursday evening, driving down paved roads that eventually became unpaved and uncertain. It reminded me of something an old friend once told me, something I still live by today. “You see a dirt road, you take it.”

For me, I was witnessing my own hurricane on stage, one that I was almost certain I’d overcome. But then I remembered another old line. “You can dance in a hurricane, but only if you’re standing in the eye.”