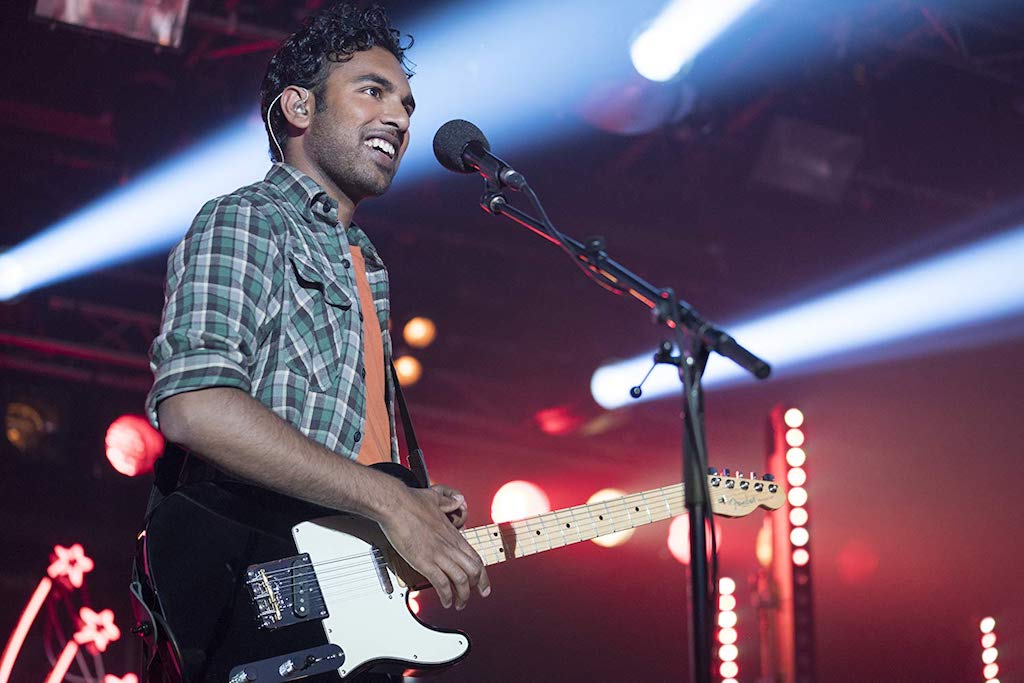 Yesterday asks a lot of its potential viewers, and the quicker you embrace what it offers, the easier it’ll be to accept the final product.  The film is an experience in taking a leap of faith, and whilst I am not suggesting that The Beatles aren’t responsible for some of pop music’s finest melodies, it would have you believe they’ve penned the greatest songs that ever were, and it’s in that high stake suggestion that Yesterday bases itself.

To add a little bit of context, this high-concept, musically-charged romantic comedy presents the idea that a weird (read: unexplained) solar flare of sorts was damaging enough to blackout the entire world for a staggering 12 seconds, a time frame that apparently was long enough to wipe The Beatles from the annals of history.  Coincidentally, in that 12 seconds, aspiring musician Jack (Himesh Patel) collided with a bus whilst riding his bike in the unexpected darkness that covered the globe.  He awakes with a few scratches, a nasty case of missing front teeth, and a get-better-soon gift in the form of a guitar, one that he immediately strums the cords of “Yesterday” on, flooring his friends in the process, believing that what they are hearing is incredibly profound, fresh, and, most importantly, original; “It’s not Coldplay, it’s not “Fix You”” he’s so told though when he claims what he just recited is one of the greatest songs ever written.

It would appear that Jack is the only person in the world who remembers The Beatles – a Google search confirms that they cease to exist (Coca Cola and the band Oasis also seemingly wiped from the cosmos) – and garnering the positive reaction he receives off performing their songs, though under the guise of his own music, the career he’s always wanted seems well within his reach; pop’s top ginger Ed Sheeran (playing himself) and his money-hungry manager (the always reliable Kate McKinnon) also injecting themselves into Jack’s story, looking to poach him for their own individual gains.

With Danny Boyle (Trainspotting, Slumdog Millionaire) behind the camera, and script-work from Richard Curtis (Bridget Jones’s Diary, Love Actually), one would expect Yesterday to feel more exciting than it does.  There’s no personality on hand, and as grand a concept it has at its disposal, Curtis’s script never explains or investigates further than it has to; even the love story it packages itself around involving Jack and his friend-zoned girlfriend-in-waiting Ellie (Lily James, as endearing as you’d expect) is pedestrian.

Of course, as much as the script buckles under its own ambition, one can’t accuse Yesterday of lacking in harmless charm.  The story is strange, but the ensemble cast are all up to the task of following through with their material, with Patel making for a fine debut as the cute every-man who learns the error of his manner in the most schmaltzy, Hollywood way you’d expect.  Sheeran makes for a better singer/songwriter than actor (though he’s not Mariah Carey Glitter-level terrible, so there’s that) but McKinnon picks up his slack tenfold, as does the loveably awkward Joel Fry as Jack’s no-filtered manager.

Whilst Yesterday doesn’t commit fully to its premise and prefers to safe-play it rather than detour from the generic romcom route it appears comfortable in travelling, there’s a likeable sheen smeared over the story that’s near-impossible to not succumb to.  Not the profound vehicle it should be given the collective mindset of both Boyle and Curtis on hand, but as a harmless, cheery comedy vehicle – with one helluva soundtrack, mind you – Yesterday is satisfying viewing.

Yesterday, everyone knew The Beatles. Today, only Jack remembers their songs. He’s about to become a very big deal. From Academy Award®-winning director Danny Boyle (Slumdog Millionaire, Trainspotting, 28 Days Later) and Richard Curtis, the Oscar-nominated screenwriter of Four Weddings and a Funeral, Love Actually and Notting Hill, comes a rock-n-roll comedy about music, dreams, friendship, and the long and winding road that leads to the love of your life.

Yesterday (M) is screening in Australian theatres from June 27th 2019.