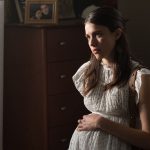 Strange but True is an American noir-thriller based on the novel of the same name by John Searles.  It’s five years since the death of Ronnie Chase on the night of his high school prom. His girlfriend, Melissa (Margaret Qualley) turns up at his brother’s place, claiming to be pregnant by Ronnie, as she’s only been with one person. Ronnie's mother (Amy Ryan) lives in a … END_OF_DOCUMENT_TOKEN_TO_BE_REPLACED