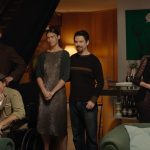 The end game is given away quite early on in the film for those paying attention. However, despite of it, and probably because of it, the characters move the story to build anticipation and curiosity that makes you want to stick with it. Chris Black (played by Luke Cook) strikes up a conversation with stranger, Emi Mustafi (played by Tatiana Quaresma) at a laundromat. A … END_OF_DOCUMENT_TOKEN_TO_BE_REPLACED