The Space Between the Lines 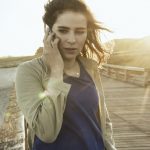 What starts as an accidental slip of the keyboard, will turn the lives of the lead protagonists in The Space Between the Lines. Emmi (played by Nora Tschirner) believes she is cancelling her online dating site subscription when her email mistakenly arrives in the inbox of Leo (played by Alexander Fehling). Leo, while slightly amused, ignores it as his attention is elsewhere … END_OF_DOCUMENT_TOKEN_TO_BE_REPLACED