You are here: Home / Entertainment / The Botanist’s Daughter by Kayte Nunn – Book Review 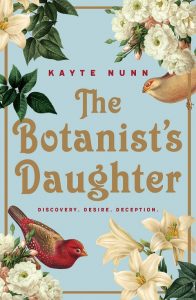 The Botanist’s Daughter by Kayte Nunn involved painstaking research into 19th century Cornwall and Chile and was inspired by real-life, intrepid, female explorers of that era.

It is 1886 in Cornwall, England, and Elizabeth’s father, John Trebithick, the adventurer, expert botanist and plant collector, has recently died. Elizabeth decides to fulfill her father’s ambition to travel to Chile to find the elusive Devil’s Trumpet that has the potential to kill or cure. She hopes to find the plant that grows in the alpine valleys of Valparaiso and Santiago, before her father’s great rival. Damien Chegwidden, also from Cornwall, will stop at nothing to procure the plant. Ignoring the warnings of her sister and brother-in-law, Elizabeth embarks upon a hazardous sea voyage to Chile with her maid Daisy.

After months of travel they arrive at Valparaiso where they are met by Mrs Campbell with whom they are to lodge. It is Mrs Campbell who introduces Elizabeth to Tomas Esteban Flores, who works as an interpreter and guide for foreign visitors. Tomas knows the area well and takes Elizabeth to the spectacular “Valley of the Palms” where he shares his knowledge of the local flora. Will this be the place that conceals the elusive Devil’s Trumpet?

In 2017 in Sydney, Australia, Anna, who is a botanist and horticulturist, has inherited her grandmother’s house. During renovations a metal box is discovered that contains a sketchbook filled with meticulously executed botanical illustrations, painted in vivid watercolours. There is also a photograph, dated 1886, a pressed flower, and some small seeds. After consulting fellow botanists, Anna flies to London, where she seeks the help of Dr Edwin Hammett-Jones.  Edwin is a taxonomist at Kew Gardens and an expert in South American flora. He also grew up in Cornwall and agrees to help Anna search for the Trebithick family, and, hopefully, discover answers to the mystery of the hidden box.

Although a work of fiction, the narrative in this book has been extensively researched by the author. Her passion for plants and their flowers emanates from every page.

The Botanist’s Daughter is a tribute to dedicated plant hunters, both male and female, who travelled the globe in search of new species. It also reminds us of those who are committed to ensuring that all known species, many now threatened with extinction, are preserved for the future.

The Botanist’s Daughter is available in paperback, eBook and audiobook

Kayte Nunn grew up in England and the US. She then lived in Sydney for more than 20 years working as a book, magazine and web editor and writer. She has over two decades of publishing industry experience, and is the former editor of Gourmet Traveller WINE magazine. Author of two contemporary novels, Rose’s Vintage and Angel’s Share, The Botanist’s Daughter is Kayte’s first novel of transporting historical fiction, and stems in part from her love of flowers and all things botanical.