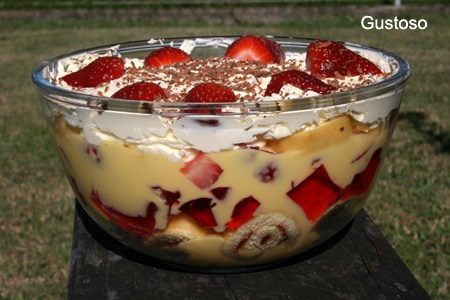 I was wanting to make something British to celebrate the arrival of the Royal baby boy. I’ve tried to make this trifle as traditionally as possible, but there is some debate about whether to add jelly or not to a trifle. I like the strawberry wobble, so it’s staying.

The British touches I have used are reminiscent of strawberries and cream at Wimbledon. My British mother-in-law sets the fruit in the jelly, so you could try that but leave a few strawberries aside to decorate the top of the trifle. This trifle is a celebration of all things British and seasonal for their summer time.

I’ve used mini Jam Swiss rolls for the cool effect it gives to the side of the glass bowl, but you could also use Madeira cake or Victoria sponge.