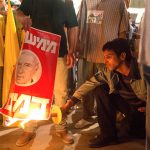 Returning to the big screen, the Jewish International Film Festival celebrates extraordinary Jewish-themed film from Israel and the Jewish diaspora.  Running in Brisbane from February 17th - March 24th, this year promises a diverse program of film from around the globe including Opening Night feature film Incitement, an exhilarating and award-winning drama about the … END_OF_DOCUMENT_TOKEN_TO_BE_REPLACED