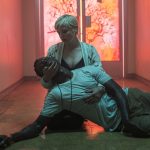 The closing night special of this year’s German Film Festival is a spectacular story of one man’s fight for a better life. Don’t be put off by the film’s length, nudging just under three hours. It’s a pacy rollercoaster through a decadent and destructive charm of Berlin. Francis (played by Welket Bungué) has survived an escape from Guinea Bissau; he's washed up on a beach in … END_OF_DOCUMENT_TOKEN_TO_BE_REPLACED