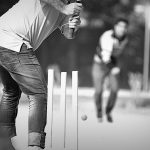 It’s been an up and down year for Cricket Australia. On the plus side, Steve Smith’s rehabilitation and forgiveness is complete. The relish with which he spent hours at the crease during the Ashes series, seemingly feeding off the “pantomime villain” role handed to him by the Barmy Army was a sight to behold. By the time the series was over, even those partisan supporters could … END_OF_DOCUMENT_TOKEN_TO_BE_REPLACED