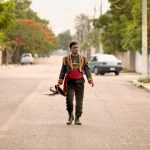 https://www.youtube.com/watch?v=nR08yvgwPjE Right from the film's opening text stating that this film is "based on a hundred true stories", Chris Morris' bitterly dark comedy The Day Shall Come never shies away from making a mockery out of reality.  Having already tested his audience's sympathetic limits with his first feature, 2010's suicide bomber farce Four Lions, it should … END_OF_DOCUMENT_TOKEN_TO_BE_REPLACED

https://www.youtube.com/watch?v=UqsdrYBPjv8 As if Alfred Hitchcock directed Gone Girl with his tongue firmly plated within his cheek, A Simple Favour is a delightfully twisted neo-noir comedic thriller that’s almost too clever for its own good.  I say almost as it becomes evidently clear in the film’s early stages that director Paul Feig and screenwriter Jessica Sharzer … END_OF_DOCUMENT_TOKEN_TO_BE_REPLACED