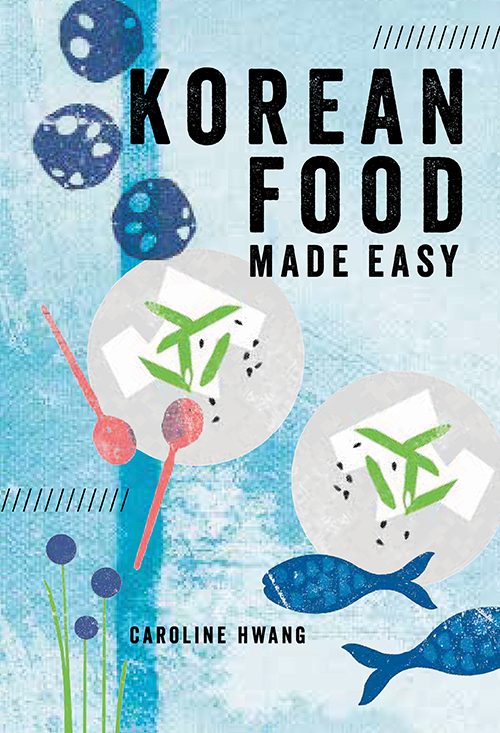 Korean Food Made Easy by Caroline Hwang promises to introduce you to cooking one of the simplest and healthiest cuisines in the world.

The introduction is short and followed by top 12 star experiences to have in Korea. There are a couple of illustrated pages devoted to explaining Korean fresh ingredients, liquids and then pantry or larder type items you might need to buy.

The cookbook is divided into the following chapters: banchan (small dishes), kimchi, soups and stews, meat, poultry and seafood, noodle and rice, dosirak (lunchbox and snacks), desserts and drinks. Each recipe has been illustrated. There are step by step instructions for making kimchi. There are six ways to use kimchi, rice dishes, and pancakes. The book finishes with a meal planner and index.

I enjoyed cooking and eating Korean-style Chicken noodle soup and marinated short ribs. I’m looking forward to trying lotus root chips next. I had to buy them from my local Asian supermarket by showing the shop assistant a photo of them!

Korean’s often start the meal with the phrase “Please, eat well” and then end it with “Thank you so much, I have eaten very well.”

I was intrigued by Army Base Stew – packed with spam, hot dogs and American cheese. It was made after the Korean War when food ware rationed and they could only get their hands on military issued.

The desserts are probably not what you are used to – like Korean melon ice lollies (ice blocks), mocha chiffon roll cake and caramelised sweet potatoes.

Korean Food Made Easy will easy you into cooking this delicious cuisine.

Caroline K. Hwang was raised in Los Angeles, California, in the heart of Koreatown. Her love for Korean home cooking came directly from her grandmother, who lived with her family and fed Caroline and her brother while her parents were out at work. Her grandmother’s cooking was simple but always nourishing and comforting, teaching Caroline that simplicity and good ingredients were the basis for good cooking. After graduating from Art Center College of Design where she studied illustration, she moved to Brooklyn, New York. Her love and passion for cooking and food eventually won out over her illustration career. After years of working as a prep cook and line cook, in addition to running an underground supper club, she began assisting food stylists and eventually started styling on her own. She’s worked for Food & Wine Magazine, Goop, Starbucks, among others. She’s written a handful of other books under Marabout, as well as writing a cocktail column, and is the current food editor of Tidal Magazine. She’s moved back to Los Angeles, where memories of her childhood and the ever-expanding Koreatown serve as inspiration for her cooking and styling.