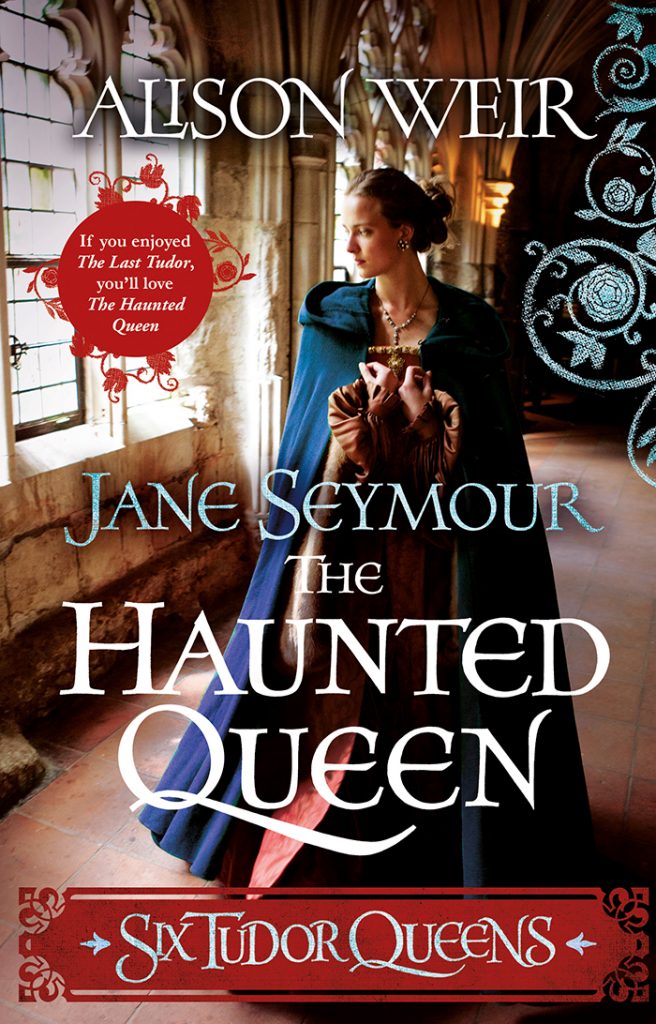 Jane Seymour – The Haunted Queen by the acclaimed author, Alison Weir, is the third novel in her epic series, Six Tudor Queens about the wives of King Henry VIII. It reveals another side to Jane’s nature and her relationship with King Henry as his most beloved wife and mother of his only legitimate male heir.

As a child Jane longed to serve her religious beliefs as a nun, but, when she came of age, her family overruled her plans. She was sent to the King’s court where she was made a lady-in-waiting to Queen Katherine of Aragon. Jane came to love and admire Katherine, who shared her beliefs and was a kind mistress to all who served her.

Rumours of Henry’s lustful affair with Anne Boleyn, another of the Queen’s ladies, shocked the court. When Katherine was disavowed and Anne made Queen, Henry’s behaviour and religious reforms affected not only the lives of his subjects but his relationships abroad. The repercussions caused political and religious tension with the Pope and the rulers of France and Spain.

Soon Anne’s shrewish behaviour sends Henry looking for a less tempestuous relationship and he turns to the kind and gentle Jane. But fearful of his intentions, Jane’s conscience and religious convictions prevent her from responding. Urged on by her family, who wish to earn promotion and favours from the King, will Jane give in to her own desires? Can she live with Anne’s demise, marry, and give the King his long-awaited son?

This well-researched and detailed description of the life and times of Jane Seymour and the court of King Henry VIII is a must read for lovers of historical novels. Alison’s version of this royal romance brings with it new insight into the character of the often much maligned Jane. It tells of a woman of firm religious beliefs, who is compassionate, kind and loving. Often haunted by Anne’s ghostly presence she struggles to retain her true self.

Alison has included, as an afterword, further research that she did for the novel. It includes debate on various aspects of the true history of this era and modern medical insight into how Anne may have died.

About the Alison Weir

Alison Weir, born 8th July 1951, is a bestselling British writer of numerous historical novels both in the UK and the USA. Her first published work, 1989’s Britain’s Royal Families, was a genealogical overview of the British royal family.  She subsequently wrote biographies of Eleanor of Aquitaine, Isabella of France, Katherine Swinford, Elizabeth of York and the Princes in the Tower. She is now working on two concurrent series of books: Six Tudor Queens and England’s Medieval Queens. A further series of books will be announced next year. Weir now lives in Surrey with her husband and two sons. Weir is a supporter of the renovation of Northampton Castle, explaining that the estate is a “historic site of prime importance; it would be tragic if it were to be lost forever.