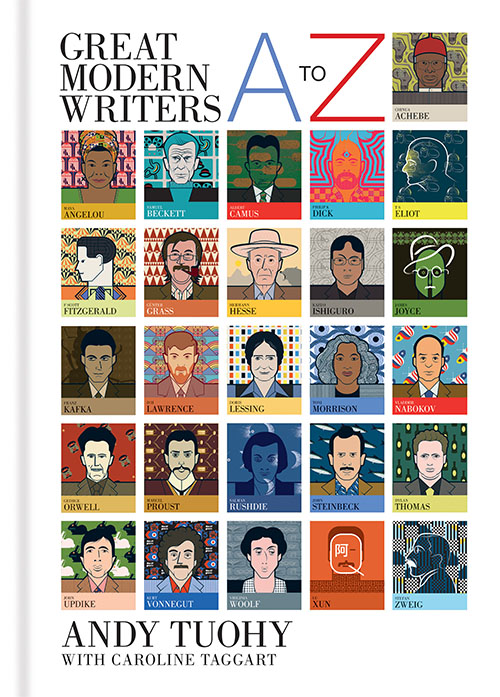 The full title of the book is A to Z of Great Modern Writers. It covers 52 writers who flourished in the 20th century. It is a great introduction to some of the world’s best modern writers from Maya Angelou to Stefan Zweig via Simon de Beauvoir, Kazuo Ishiguro and Vladimir Nabokov.

Each author has at least a two-page spread dedicated to them. You can read about their nationality, years of birth and death, a suggested reading list and a couple of paragraphs to several pages about their life. I enjoyed reading the ‘did you know’ sections.

Graham Greene – An established writer who traveled to sensitive areas such as Libya, Cuba and Mexico for his novels, Greene was ripe to be recruited by MI6, as he had the perfect cover. He was recruited by his sister Elizabeth, who also worked there, and his supervisor and friend was Kim Philby, later known in spying circles as the ‘Third Man’.

There is a funky graphical image of each author’s face, and sometimes photography of the author and or their book covers. Andy Tuohy has created some eye-catching portraits for this book.

Great Modern Writers is perfect as a coffee table book as you can pick it up and read about your selected author. It would also make a great gift for book lovers who like to try new genres and topics. Book club members might like to debate who they’d include in their top 52 authors.

There are two other books in the series covering modern artists and film directors.

Available in hardback and ebook.

Caroline Taggart was born in London of Scottish parents, spent most of her childhood in New Zealand and went to university in Sheffield. Confused for some time, she now thinks of herself as a Londoner, but continues to change allegiance whenever it suits her, particularly during the rugby season. Having worked in publishing for 11 years, she gave up a perfectly respectable job to become a freelance editor in 1989. Since then she has worked bizarre hours, gone out to lunch a lot and indulged her lifelong dislike of getting up in the morning.

Andy Tuohy is a graphic designer and worked in advertising for many years before becoming a freelance artist/ designer. He has had design work commissioned by the Tate Modern and Tate Liverpool, Turner Contemporary and Henley Regatta, and has been featured in Design Week amongst other publications.