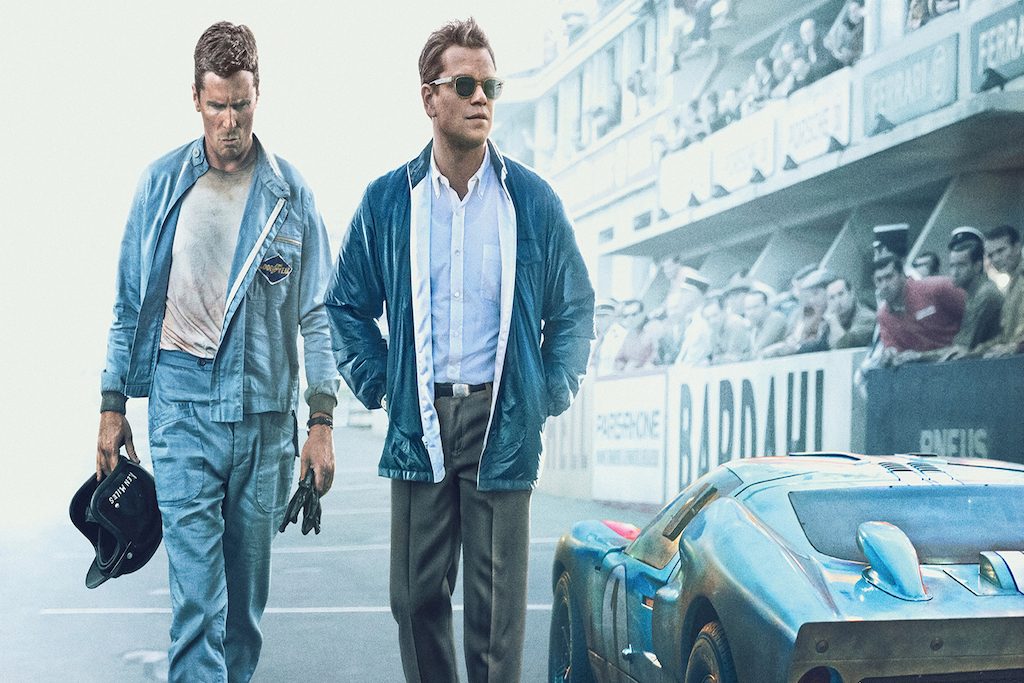 An old fashioned star vehicle and arguably the most entertaining film Matt Damon and Christian Bale have attached themselves to in the last few years, Ford V Ferrari is a beautiful-looking epic reminiscent of bygone cinema.  A risky tactic from director James Mangold (Walk the Line, Logan) in that he’s made a story-heavy car racing film for adults in a cinematic climate where the majority of audiences have a limited attention span, Ford V Ferrari manages to successfully transcend expectation by delivering a product where a love and/or knowledge of car racing isn’t a prerequisite in enjoying yourself.

The year is 1966 and motorcar sales for Ford are dwindling at a rapid rate.  The company’s VP, Lee Iacocca (Jon Bernthal), has a plan though – to buy rival auto giant Ferrari, an idea that initially appears to be travelling towards mutual ground.  This is business though, and one run by defiant men at that, so whatever ease there appears to be in a contract and a handshake is invalid, and when the deal falls through in the shadiest of manners there’s a permanent stain of bad blood left between the companies.

This leads to an obsession within the Ford brand to build a race car that’s fast enough to outperform Ferrari, and the 24 hour race Le Mans in France appears to be the perfect battle ground.  Good thing then that Ford have legendary American driver and car designer Carroll Shelby (Damon), the only American to win Le Mans, on their books to help develop such an automobile.  Damon leans into his likeable, everyman appeal as Shelby, maintaining a sense of decency and honour throughout, especially when it comes to his devotion to Bale’s Ken Miles, an unpredictable British driver who is enlisted (mostly against Ford’s wishes) to drive at Le Mans due to his stellar track record whenever he has gotten behind the wheel.

As Miles, Bale, once again, uses his transformative shine to fully embody the character, though, rather refreshingly, it’s more to do with his mannerisms and delivery as the usual weight gain/loss and prosthetic use has been sidelined for a performance that’s grounded in pure talent.  It’s a welcome reminder of what made him a star in the first place, and his natural intensity never overshadows the affable nature of his character.  As stubborn as Miles is, he’s someone we instantly gravitate towards due to his devotion to his family (Noah Jupe as his adoring son, Caitriona Balfe as his ardent wife), certifying himself as the heart of the story in the process.

Much of Ford V Ferrari‘s narrative is centred around the Ford team constructing the car they’ll need for Le Mans, with the race itself confined to the film’s last act, though the 152 minute running time ensures that the race still earns the focus it deserves.  Human drama constantly remains the film’s nucleus though, and as much as the Jez Butterworth/John-Henry Butterworth/Jason Keller-penned script relies on the expected tropes of these types of stories – Josh Lucas’s insufferable villain-type PR executive being a classic example – the enthusiasm and dedication from everyone involved keeps the film above whatever traditional archetypes threaten to derail it.

Entertainment at its highest point buoyed by a duo of inspired turns, Ford V Ferrari may not break the mould within the biopic field, but it’s nonetheless a lavish, slickly made film that is fuelled by charisma and runs with it all the way to the finish line.

Academy Award®-winners Matt Damon and Christian Bale star in FORD v FERRARI, the remarkable true story of the visionary American car designer Carroll Shelby (Damon) and the fearless British driver Ken Miles (Bale), who together battled corporate interference, the laws of physics, and their own personal demons to build a revolutionary race car for Ford Motor Company and take on the dominating race cars of Enzo Ferrari at the 24 Hours of Le Mans in France in 1966.