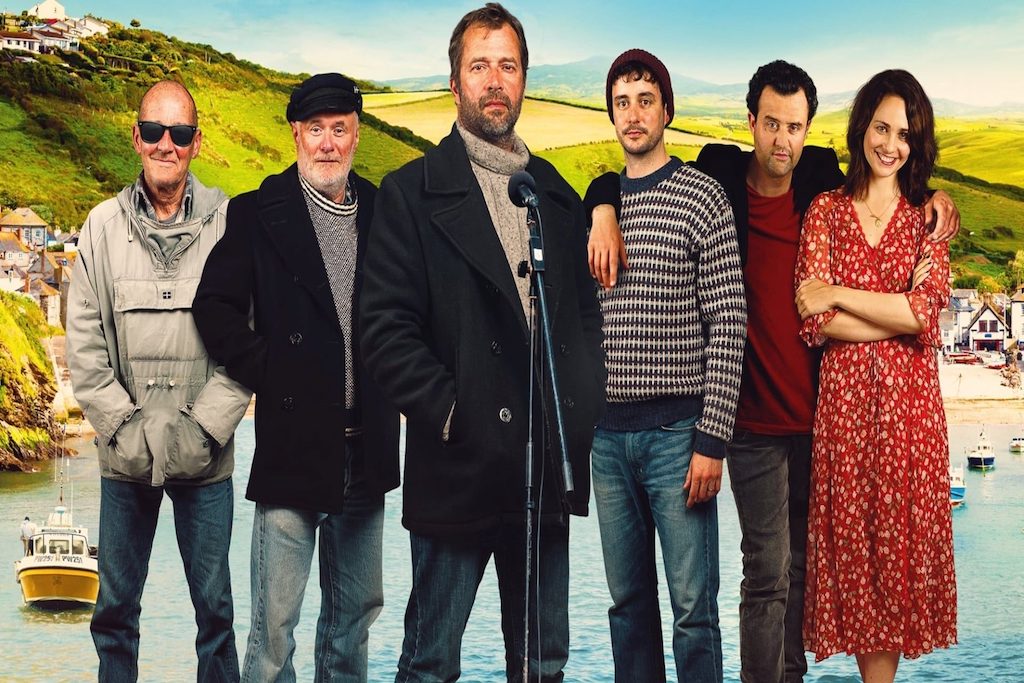 Fisherman’s Friends, one of those predictable feel-good true story tales that recounts the type of event better suited to a morning show segment rather than being extended for 112 minutes, ticks so many boxes in terms of what narrative beats to hit that it feels more design-by-committee rather than an organic telling.

Given that it is based on a true story though it’s difficult to completely dismiss its structure, and there’s certainly no harm in feel-good storytelling (especially in today’s climate) – I can attest that the older audiences in tow at the screening were lapping up the age-appropriate humour – but it’s also terribly contrived; basically, if you can remove cynicism from your psyche for a sitting and you’re OK with an unsurprising structure than Chris Foggins’ harmless dramedy could do the trick on a Sunday afternoon.

Initially centring itself around a quartet of hotshot London music executives – all particularly unlikeable chaps too – who have had their stag party plans thrown by the wayside when their rented yacht is a no-show, Fisherman’s Friends seemingly appears to follow the classic fish-out-of-water mentality by setting itself up as a bro-centric comedy about four city lads having to adjust to the nature of a small village by the sea.  And for a few minutes this is adhered to, but when the titular friends – a collective of village gentleman who sing sea shanties in a particularly melodic fashion – are heard by our London lads the film pivots towards its main plot strand of attempting to sign the band up for an unlikely record deal.

This is easier said than done as the band don’t want fame or recognition in any manner, and Danny (Daniel Mays, taking a while for us to warm up to him), one of the London execs assigned to finalising the deal, is unaware that his egotistical co-workers pushing him to sign them is nothing more than a prank.  As Danny’s usual sweet-talking business schmooze fails to impress the band, it becomes evident that he’s going to have to put in the hard yards, so it’s lucky for both him and us that he starts to actually like the band, genuinely hoping that a deal can be struck.

As his unlikeable mates head back to London (it’s never explained why they’re such jerks to him specifically), Danny starts to play nice with the locals, and single mum Alwyn (Tuppence Middleton), who has already had a run-in with him because why shouldn’t we adopt a few romcom ingredients in the meantime, is his main playmate, the two overcoming their differences as their deep-seated loneliness ultimately match each other’s.  Central to Danny’s success in signing the band is Jim (James Purefoy, brooding with warmth and masculinity), Alwyn’s father and the group’s lead singer, who waxes lyrical about the importance of community and history before succumbing to his better judgement and agreeing to Danny’s wild notion that people may actually want to buy a record from men of a certain age singing the type of sing-alongs best suited to a pub rather than the UK airwaves.

Given that we are watching a film dedicated to the band the fact that they ultimately find success comes as no surprise, but director Foggins and his trio of screenwriters (including Nick Moorcroft who penned the similarly schmaltzy Finding Your Feet) are unable to avoid the by-the-numbers trappings we have practically come to expect from these type of relayings with a series of side-dramas shoehorned in; the local pub is going under (of course) and Danny believes he’s doing the right thing by recommending a colleague’s father to purchase it, but his George Hamilton-tan and perfect hair indicate a shady villain so we’re unsurprised when this goes pear-shaped and Danny’s held accountable.

Whilst the film is by-the-numbers (almost insultingly so), Fisherman’s Friends has mostly winning performances at its core, its sense of history is charming, and, of course, the singing is endearing – even if it’s not the type of music you would ordinarily gravitate towards.  It’s harmless filmmaking at the end of the day, but if you’re after something with substance that’ll resonate with you after you’ve exited the theatre than best look elsewhere as these Friends can’t quite provide you with the greatest hits you’ll want to hear on repeat.

A fast-living, cynical London music executive heads to a remote Cornish village on a stag weekend where he’s pranked by his boss into trying to sign a group of shanty singing. He becomes the ultimate ‘fish out of water’ as he struggles to gain the respect or enthusiasm of the unlikely boy band and their families who value friendship and community over fame and fortune.