You are here: Home / Entertainment / Fatherhood – Stories About Being A Dad – by William McInnes – Book Review 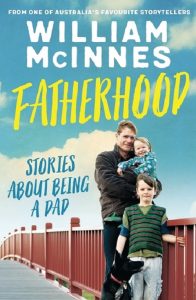 Fatherhood – Stories About Being A Dad – by William McInnes, bestselling author and acclaimed actor, is about a subject very close to his heart. Fatherhood is about past memories of his father, and those he’s creating as a father himself today.

In his latest book William McInnes contemplates aspects of fatherhood with humour, warmth, and nostalgia. He relates tales of his childhood and his rapport with his own father, whose laconic humour seemed to create a barrier between them. He compares this standpoint with the more emotional feelings he has for his own children.

William tells tales of his uproarious encounters with manual arts teachers as a schoolboy. And there are comical stories of ‘Other People’s Fathers’ – from the volatile gem-setter in his little room under the stairs, to Mr Orienteer with promises of his ‘special scroggin’.

There is advice to his daughter on her choice of glue to mend a picture frame, which ends in the hardware store, as he reminisces of all the brands of glue he has known, loved and, possibly, eaten.

Lovingly, he writes tongue in cheek letters to both his daughter and his son.

His memories of the past reflect the differences in attitude between a father and his son back then. Those of today reveal the closer, more hands on relationships between fathers and their children.

A must read for all. It will take you back to your childhood and those halcyon days on the beach with mum and dad or of visiting the latest theme park with your own children. It will remind you of those who are dear to you.

Fatherhood is available in paperback, e-Book and audiobook

William McInnes is one of Australia’s most popular writers and actors. His books include the bestselling memoirs A Man’s Got to Have a Hobby and That’d Be Right. In 2012 his book Worse Things Happen at Sea, co-written with his wife, Sarah Watt, was named the best non-fiction title in the ABIA and Indie Awards.
Also an award-winning actor and best known for his leading roles in Blue Heelers and Sea Change, William has won two Logies and an AFI Award for Best Actor in the film Unfinished Sky. He recently starred in the TV dramas Deep Water and Rake. William grew up in Queensland and lives in Melbourne with his two children.