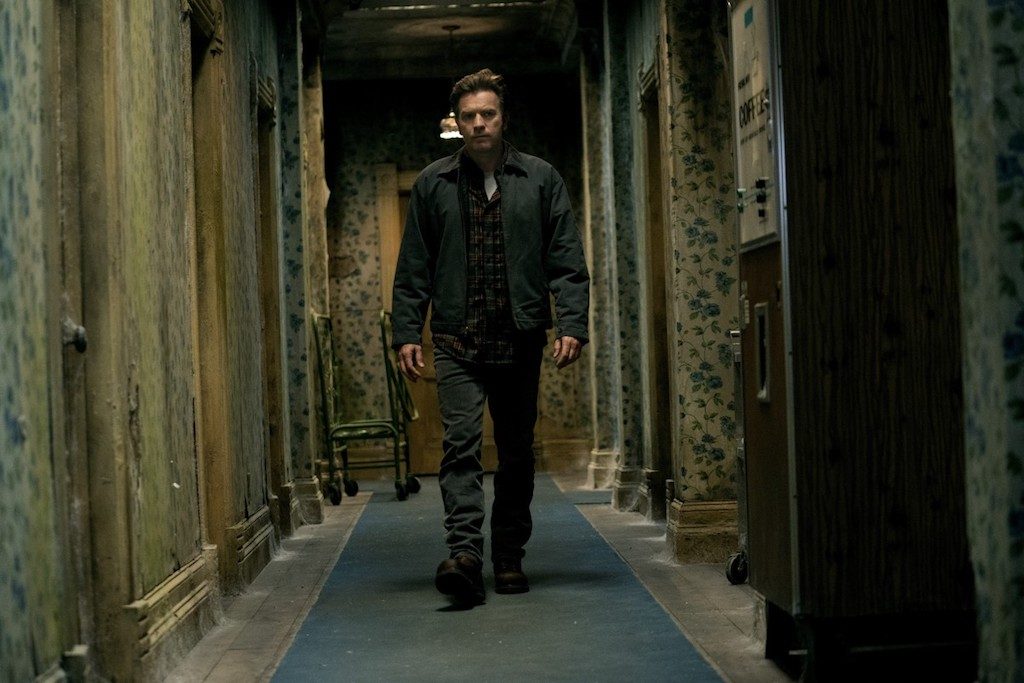 Screenwriter/director Mike Flanagan already has a proven relationship with author Stephen King having successfully adapted Gerald’s Game into a particularly unsettling feature.  And, of course, he’s no stranger to navigating the nature of a haunted dwelling with the acclaimed The Haunting of Hill House series under his belt also.  It would seem to reason then that the horror aficionados blending their respective strengths together once more would only benefit from their individual strengths working in a harmonious state.

It’s no simple task to faithfully adapt a King novel, nor is it to helm a sequel of a product that has the legendary Stanley Kubrick’s fingerprints all over it, but, somehow, Flanagan has succeeded in bridging a gap between the icy-psychological chill of Kubrick’s The Shining and the supernatural temperament of King’s 2013 prose, Doctor Sleep.

Hoping to put his demons behind him following the traumatic events that shaped his childhood, Danny Torrance (Ewan McGregor) works in a small New Hampshire care home where he utilises his Shine (telepathic abilities for those unversed in the lore) to assist the dying residents as they prepare to cross over.  As we learn though, Danny isn’t the only fantastically gifted being out there, but far worse however is the band of child murderers The True Knot who, under the guidance of their gypsy-cum-cult leader Rose the Hat (a chillingly effective Rebecca Ferguson), seek out young children gifted with their own Shine and slaughter them accordingly, feeding off their psychic powers in a sexually-charged manner not unlike that of a vampire drinking the blood of its prey; there’s one particular sequence involving their hunting down of a young star baseball player that is particularly savage and unsettling in its suggestive brutality towards children.

Working off King’s 531-page novel and clocking in at a solid 152 minutes, Doctor Sleep is in no rush to skimp on details.  Whilst Flanagan’s film indulges in the slow-burn mentality that laced Kubrick’s preceding tale, the director showcases an evident need in wanting to cover the necessary ground, which in turn allows Danny, Rose the Hat, and the powerful Shiner Abra (Kyliegh Curran) – a young teenaged girl whose telepathic communications with Danny force him to reveal himself as the powerful man that he is in order to throw the insatiable Rose the Hat off Abra’s scent – the rounded attention they deserve.

Speaking of Rose the Hat, Ferguson is undoubtedly Doctor Sleep‘s MVP, with the actress equal parts alluring and terrifying.  The film can amp us towards the inevitable return to the Overlook Hotel as much as it wants to, and Doctor Sleep‘s climax admittedly impresses with a faithful recreation of the hotel that so much of Kubrick’s vision was housed within, but it’s the spirits that inhabit the hotel’s hallways and secluded rooms that evoke fear, and Ferguson’s Rose is an evil entity arguably more savage than any of the other characters combined.  It’s when we witness just how determined she is to steal Abra’s Shine that Doctor Sleep truly embraces the brutal mentality I’m sure most audiences are longing for.

The film, at times, feels like it’s trying maybe a little too desperately to link itself to The Shining, and, through no fault of McGregor’s performance, the character of Danny doesn’t always engage us as thrillingly as Abra or Rose the Hat do – there are times that you beg for Ferguson’s unnerving charm to return to the screen – but the occasional lull doesn’t take away from Doctor Sleep as a whole.  It’s a strong adaptation, one that beautifully brings to life one of King’s most interesting villains, and as an ambitious sequel, it’s far stronger than it has any right to be.

“Doctor Sleep” continues the story of Danny Torrance, 40 years after his terrifying stay at the Overlook Hotel in The Shining. Ewan McGregor, Rebecca Ferguson and newcomer Kyliegh Curran star in the supernatural thriller, directed by Mike Flanagan, from his own screenplay based upon the novel by Stephen King.