You are here: Home / Entertainment / A Writer Walks into a Record Bar 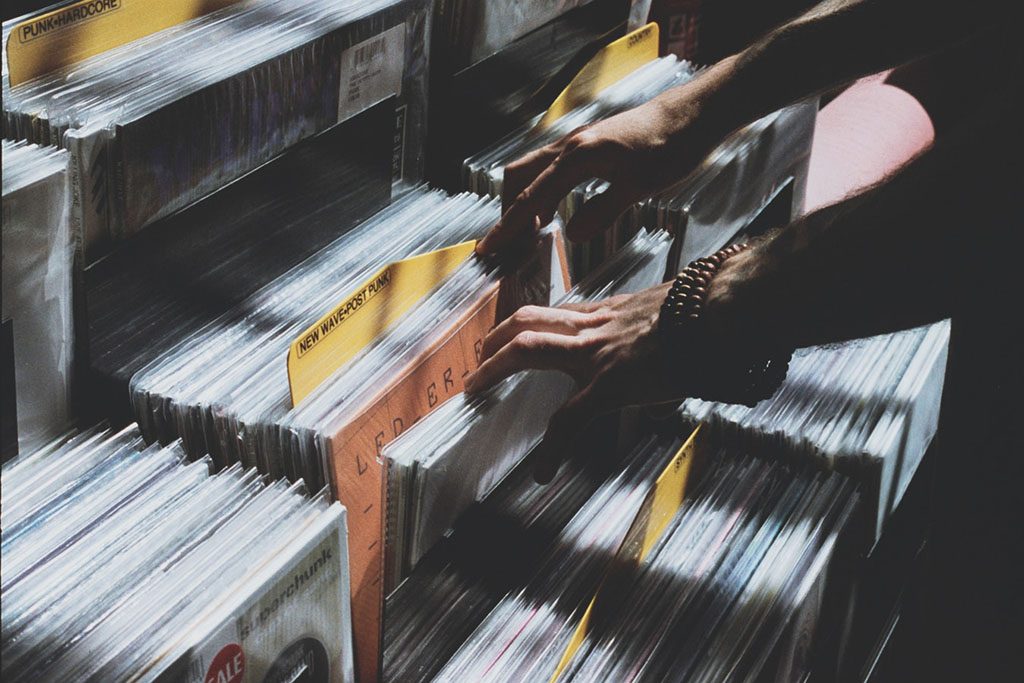 While wandering back from my morning coffee, I stumbled into the local guitar shop and asked for some music recommendations. The friendly owner said to swing by Phase 4 and see what was on the wall.

“You mean the second-hand record shop around the block and on the main road?”
“Yes, that’s the one. It’s across from the Beat”

I walked around the block to rehearse what I wanted to say. Music has been absent from my life in recent years. And I hated appearing dumb.

The door was locked so I almost back away towards the mall. A lady unlocked it saying she must have accidentally turned the handle the wrong way. My reusable water bottle was jangling so I placed my bag on the floor.

Then I browsed through the albums looking at the artwork. I tried the rock section first. I had just watched the ‘Abstract’ documentary series on Netflix and was keen to spot something designed by Paula Scher. A record almost fell out of its cover. I gave up on my search. I felt like an amateur.

On the left-hand side of the wall was the recently released albums. I selected them one by one and turned over the cover to read about the artists. All of them were produced by local label Swashbuckling Hobo Records.

Then I discovered Eyes Ninety featuring a guy I might have worked with back in my heyday. He’s nickname these days is lucky Ben. I wondered why.

The Busymen album promises to put garage rock under attack.

I struggled reading the fourth album, so I took it over to the counter.

“Read the record’s spin,” said the customer who looked like Hugh Bonneville.
“Oh, I can’t read that. The font is tiny”. I said, squinting through my glasses.
The owner said “It says Stink Bugs… Infestation.”

I moved the record around in my hand and caught each letter. Yes, of course, it does.

The owner talked about his unpublished book and how he didn’t want to leave out any good stories or offend anyone.

The casually dressed customer left to get a coffee nearby.

I was exhausted from a late night watching a horror slash sci-fi film. I took a seat at the counter. We introduced ourselves and then I asked:

“What record label is yours?”
He said “LCMR”
“What’s LCMR stand for?” I said.
“Late-Century Modern Recordings.”

It was to do with the years of release. I had trouble googling the name of the album on my mobile phone, so I just took a photo.

I’ve bought way too many albums that I never listened to, that these days I like to listen to a sample of them online first. Besides I’d just splurged on renewing my Spotify’s membership.

I hopped on the train and started creating a new playlist. I wanted to listen to them but I’d forgotten my headphones. I wasn’t sure if my fellow train passengers would share my music taste.

The first thing I did when I got home was to create a playlist cover in Photoshop.

Doubts about my music knowledge (or lack of) crept in.

I thought “Why would anyone care about my taste in music? I’m sure no one will follow me or even read this article.”

Fortunately, someone else wiser had selected these records.

About Phase 4 Records and Cassettes

All music mentioned are available from Phase 4 located at 680F Ann Street Fortitude Valley. The owners are Donat “Donny” Tahiraj and Julie Morrison.