You are here: Home / Entertainment / A Fat Lot of Good by Dr Peter Brukner – Book Review 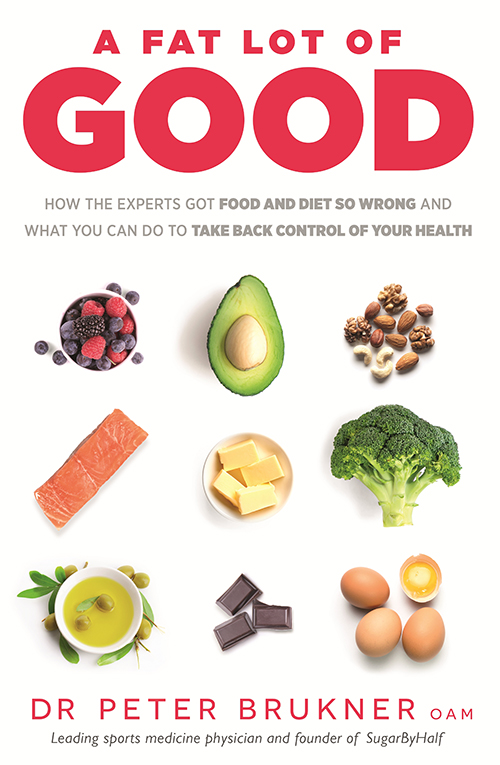 A Fat Lot of Good by Dr Peter Brukner will be essential reading if you want to learn about the low carb and healthy fat (LCHF) diet that is starting to overtake the paleo diet.

There are a few books which deal with similar topics, but Peter’s stand at the top of the pile as he provides a compelling personal story where he lost 13 kilograms in 13 weeks. He also backs up his statements with scientific research and evidence.

Peter states his diet rules as: “There would be no more sugar or junk food, but more importantly no more rice, pasta, potatoes, bread or cereal. There was no fruit juice, and the only fruits I would eat would be a few berries. Instead, I was going to have some of the things we’d been told for the past 30 years were bad for us: eggs and bacon, butter, cream, cheese, full-fat milk, grass-fed meat, cold-water fish (salmon and sardines), nuts and plenty of green vegetables.”

He decided to not count calories, but rather focus on keeping his total daily carbohydrate intake under 50 grams (down from 200 grams).

The first part of the book deals with the crap food pyramid and the bad science that created it. It also covers the misinformation about cholesterol, calories and salt. Then the book tackles the real issues we are facing like insulin resistance, inflammation, gut microbiome and changing our macros.

Peter has created 5 golden rules and second half of the book is packed with practical information for following the new diet. There are only a handful of his favourite recipes, but plenty of websites to obtain further information.

A Fat Lot of Good will be your go-to book for starting the LCHF diet.

A Fat Lot of Good is available as paperback and ebook.

Dr Peter Brukner OAM is a world-renowned Australian sports medicine clinician and researcher. Until recently the team doctor for the Australian cricket team, he has held similar positions at Liverpool FC, Melbourne and Collingwood AFL clubs, the Socceroos and with the national Olympic athletics team.

A professor of sports medicine at La Trobe University, Peter is also the author of several books, including Clinical Sports Medicine and Food for Sport, and a founder of the SugarByHalf public health campaign. He lectures on health all over the world and appears regularly in the media, including Fox Footy TV, SEN Radio, ABC Radio and The Age.