You are here: Home / Entertainment / A Beautiful Day in the Neighbourhood – Film Review 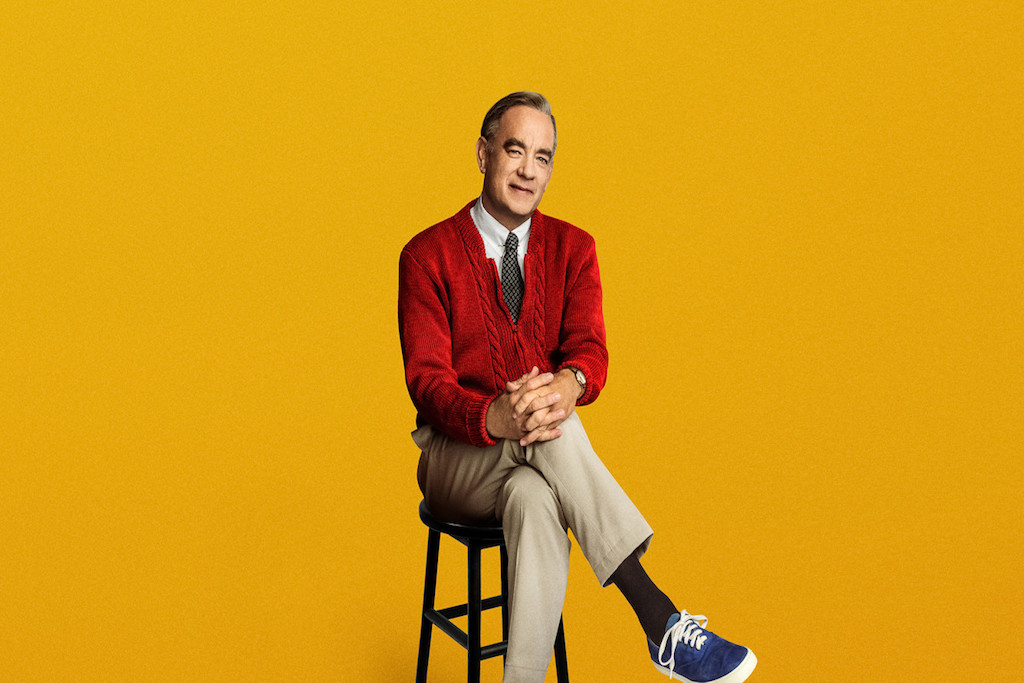 As someone who has next to no knowledge of Mr. Rogers – and I’d wager I’m in a similar boat as the majority of Australian viewers on this – his personality is something of an anomaly when viewed in A Beautiful Day in the Neighbourhood.  And that’s not a criticism in any manner, and certainly not because we live in a rather cynical world, but because Mr. Rogers’ inherit goodness is a personality trait that’s almost too pure to be organic.

As displayed in Marielle Heller’s gorgeous picture, Mr. Rogers (played so tenderly by a pitch-perfect Tom Hanks) would often keep his television show’s crew waiting for extended periods of time so he could chit-chat with visitors, he would genuinely appreciate the praise and adoration he received from fans on the street (or, in one beautiful sequence, the subway), and when a planned segment fails to film as smoothly as intended – the piece in question surrounds Rogers attempting to pitch a tent for a camping-themed episode – he refuses to re-film, insisting to leave the blunder as is so that his predominantly young audience would learn a valuable lesson: “When adults make plans, sometimes they don’t out the way they’d hoped”.

It would be too easy to call Mr. Rogers a saint – in fact you imagine he would adamantly reject that term as it would suggest unattainability – but under Heller’s direction and through Hanks’s gentle performance, that’s really what he is; although as A Beautiful Day‘s minutes roll on we slowly understand that he, like any other, has his bad days and simply chooses to channel his frustrations and anger in a more silent manner.  This only seems to add to his flawless persona, and perhaps in sensing that someone so archetypically perfect won’t make intriguing enough fodder, Heller has wisely made Mr. Rogers a supporting player in this story, serving him up as a catalyst for change for the film’s main ingredient.

That ingredient is Esquire journalist Lloyd Vogel (Matthew Rhys, criminally overlooked this award season), a fictionalised version of real-life writer Tom Junod, whose encounter with Mr. Rogers serves as the script’s inspiration.  Despite a seemingly happy marriage (Susan Kelechi Watson is a treat as his supportive wife) and fresh fatherhood, Lloyd is a haunted man of sorts, battling demons that stem from his volatile childhood.  Due to his scepticism, Lloyd is the perfect candidate to tackle Rogers when his no-nonsense editor (a small, amusing turn from Christine Lahti) demands a puff piece on heroes; rather telling of Lloyd’s reputation, Rogers was the only personality that agreed to be interviewed by him.

It’s a dynamic we’ve seen before, and you’d be forgiven for assuming A Beautiful Day… will overload itself on schmaltz as the push-pull mentality of Lloyd’s pessimism and the optimism of Mr. Rogers is too perfect a scenario, but Heller never loses control of the film’s truth.  Though it often dips its tone in lush sweetness it maintains heart and reliability throughout, resulting in a film that’s perhaps too good for the current climate but needed all the same as its old-fashioned craft and positive outlook on existence suggests the good we’re all capable of if we just took the time to listen to ourselves.

About A Beautiful Day in the Neighbourhood

Tom Hanks portrays beloved American children’s TV icon, Mister Rogers, in A Beautiful Day in the Neighborhood, a timely story of kindness triumphing over cynicism, based on the true story of a real-life friendship between Fred Rogers and journalist Tom Junod. After a jaded magazine writer (Emmy winner Matthew Rhys) is assigned a profile of Fred Rogers, he overcomes his skepticism, learning about empathy, kindness, and decency from America’s most beloved neighbor.

A Beautiful Day in the Neighbourhood (PG) is screening in Australian theatres from January 23rd 2020.